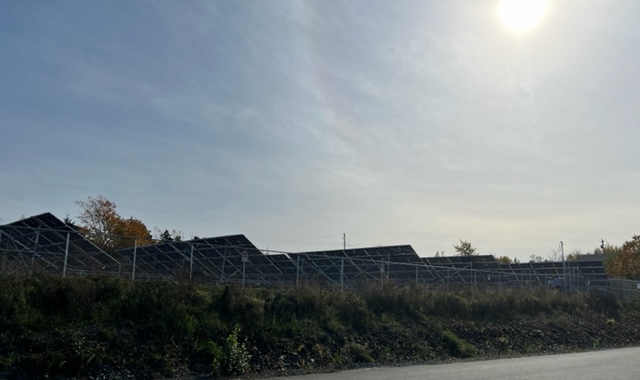 On October 26th Pictou Landing school celebrated the launch of their solar project. The project itself took about 3 years from start to finish with a lot of time spent planning at the beginning of the project. The original plan was to have the solar panels located on the roof of the school but due to the weight of the panels, the community decided that it would be better to place them near the school instead. This project, which has 200 solar panels, will generate revenue for the community because the panels are part of the grid and will be producing power which is sold back to Nova Scotia Power.

Clean Energy is very important to the community of Pictou Landing. They would like to get 80% of electricity from natural sources (solar, wind, hydro) by 2030. They are not only using the solar panels but they are also owners of 2 small wind farms. Clean energy is also being taught to their students in school through Solar Schools Canada, which has developed curriculum that helps teachers meet curriculum outcomes while teaching real-time, hands-on lessons on how their solar project is producing power. The school was also provided with 10 solar power car kits for teachers to use in their classrooms.

The company that worked on the project is called Natural Forces Solar Energy but there were many people who worked in partnership to make it happen. This project could not have become a reality without the help from Ulnooweg, Clean foundation, Department of Natural Resources and Renewables, Natural Resources Canada, NS power, Baubassin, Chief and Council and senior staff stakeholders and community members, and their Pictou Landing School staff.