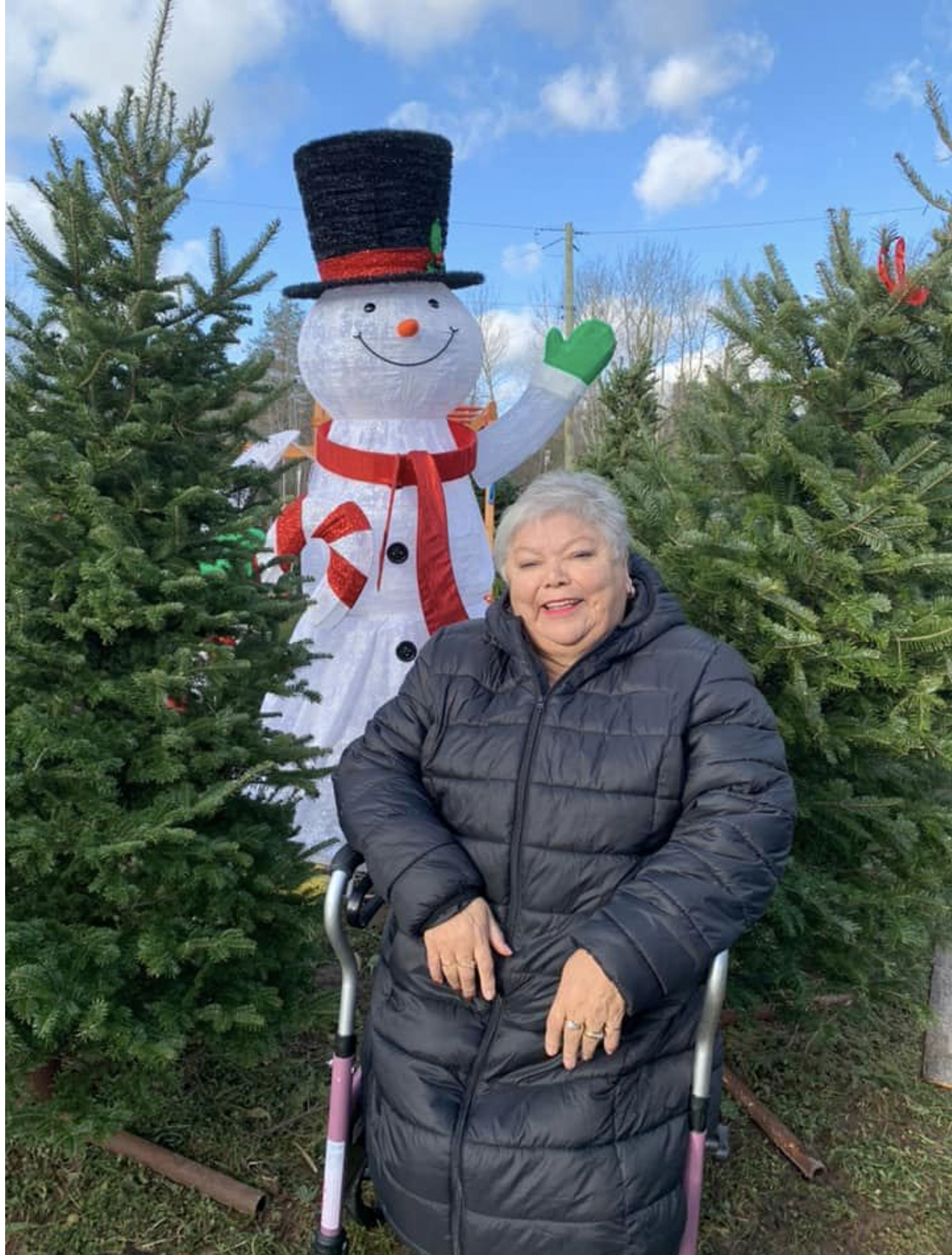 The students of Allison Bernard Memorial High School have chosen Madeline “Sugar” Poulette as their Role Model of the Year for 2021.  Madeline “Sugar” Poulette lives in Eskasoni, where she is enjoying retirement from her work in the tourism industry as a cultural guide for Eskasoni CulturalJourneys.  Sugar has gone by her nickname for most of her life; her father gave nicknames to most, if not all, of the children and the nicknames just stuck for life. In her spare time, Sugar currently teaches the traditional Mi’kmaw game of Waltes to anyone who wants to learn, including students of ABMHS, every week on “Waltes Wednesday”.  While culture is very important to Sugar, the most important thing for her is her family.  Sugar and her husband Walter Poulette had four daughters together, Paula and Stella Marie (who unfortunately passed away in infancy) and Menia and Cindy, an adopted son, Terry, and three grandchildren:Walter, Terrance, and Bravyn.  Sugar and Walter were also foster parents to 16 children over their 47 years of marriage until his passing in 2016

Sugar was born in 1952 to her parents MaryRose (Johnson) and Joseph Gould.  She is one of 11 children in the family, with her 10 siblings: Milton, Janet, Sidney John, Francis, Frances, Margaret, Joanne, Jimmy, Mary, and Bella.  Growing up in such a large family proved to be challenging.  They lived together in Membertou with their parents and grandmother in a two-bedroom house, the siblings shared a room together, their parents shared a room together, and their grandmother slept in the living room where the wood stove was.  There was no electricity in the house, either.  With so many siblings, the older siblings are often tasked with taking care of the younger siblings, so whenever they got out of the house, they often wanted to go off and be separate from each other for the day.    Sugar and her siblings didn’t spend very much time in the house growing up, they would play outside, or travel to NorthSydney often for hockey games, or go to the park.  Their parents weren’t strict and they were allowed to go off and do things on their own, they only had one rule growing up and it was to never go near the water, and as a result, neither Sugar nor any of her siblings ever learned how to swim. She does encourage her children and grandchildren to swim, as she sees the importance of it.  She has also since tried learning to swim herself, so that she can get the exercise, but still isn’t very comfortable in the water (she says “Cindy and Menia tried to teach me, but every time I’d go in the water, I’d go down like a rock!”).  When Sugar was 10 years old the family finally moved into a new house that had electricity.  Her grandmother stayed in the old house, and Sugar would often stay with her grandmother in the old house.

Sugar was taught how to play Waltes by her grandmother Philomena Gould.  She would play at home with Philomena and with her mother, Mary Rose.  She has been playing Waltes since she was 4 years old.  She also learned to count from Pauline Bernard, Dr. Granny, Sarah Jown, and a number of other elders.  She recalls a time where they would have to hide their Waltes boards and sticks from the police, as traditional Mi’kmaw games, ceremonies, and prayers were outlawed.  Because of this, you would never arrange to meet for the sake of playing Waltes, you would just play Waltes with whoever you met with.  If there were ever a police raid, they would have to hide the game in the fireplace to pretend that the pieces were firewood.

As she got older, hockey was a big part ofSugar’s life.  Her brothers were excellent hockey players, so her dad would load up a truck full of kids to go to North Sydney to watch the games. There was also a bus that would run from Membertou to North Sydney that was free, but admission to the hockey games was 25 cents, which she would sometimes earn by helping her mother with work in Sydney.  Then they would spend the day at the rink before coming home.  It was here that Sugar would end up meeting her eventual husband, Walter Poulette.

Sugar says she was in love with Walter before she even ever met him.  A friend of hers had known Walter and talked about him, and Sugar fell in love without ever having met him.  She finally got to meet him at a hockey game in North Sydney, where they talked and planned to meet again.  The next time they met, it was only 4 days later that Walter asked her to marry him.  They were stuck like glue ever since then.  When Walter asked Sugar’s fatherJoseph for his blessing, he was denied. Joseph said he had 11 children and that there’s no way he would ever give any one of them away.  Ultimately ,he made a deal with Walter: that he wouldn’t give his daughter away, but he would lend his daughter away, and that if Walter ever mistreated his daughter in any way, he’d come and take her back. They were married in 1969 in a small ceremony at 9:30AM.  Yes, 1969. If you’ve done the math, Sugar was 16 years old when her and Walter married, and they were married for 47 years until his passing in 2016.

Throughout their marriage, Walter insisted that Sugar would never need to work, but once her children were grown up, she found herself wanting to work.  She went back to school for upgrades, and found one of her dream jobs in the tourism industry.  She was drawn to the cultural aspect of tourism because of her love for the youth. She wanted to empower young people to be proud of who they are and where they come from.  Sugar found that working in the tourism industry, and doing work teaching the traditional game of Waltes to young people brought that empowerment. Being an educator requires that you be a lifelong student, and Sugar finds herself learning new things all the time when working with people, even though most of the time they are looking to her for guidance.  If she doesn’t know the answer to a question, she knows someone who does, and is eager to learn the answer for herself too.

Sugar recently retired from her work with Eskasoni Cultural Journeys, but continues to be very active in the community teaching Waltes, and making wreaths and other crafts.  She comes into ABMHS on a weekly basis to teach students how to play Waltes on “Waltes Wednesdays”, which has seen an increase in interest over the past years.  It has gotten to the point where students will start to play without her on days she’s running late, and that gives her a lot of hope that the game will continue to be played.

She also teaches Waltes to clients atNADACA, and is impressed with the interest they show in the game.  While Sugar has never drank or done drugs ,she believes that Waltes and getting in tune with your culture is a very important part of a healing journey. Some clients pick it up very quickly, learning to count, and they can then take their skills back to their communities and spread that knowledge even further.

Sugar is so active in the community because she believes in the power of community.  Often going on organized elder trips toSydney and the surrounding areas, or to Quebec on the elders’ pilgrimage, she feels it helps her stay close with old friends and to make new friends along the way.  She has always felt the value of community since she was a young girl, helping her mother with work cleaning floors in Sydney, and seeing the relief that it brought both her mother and those she cleaned for.  As she got older, she often volunteered with her sister Joanne, by cooking for wakes in the community, and organizing youth dances.

As important as community is, family is what Sugar believes is most important. Sugar was diagnosed with breast cancer, and it was the power of family that helped her through the diagnosis and recovery.  She was never alone in her condition, after being diagnosed she thought about keeping it a secret, but knew that if it were any of her own family members, she would want to know so she could support them in any way she could.  To this day, even though she lives on her own, she never spends a night alone as one of the family will always stay with her.  Sugar opted to have a mastectomy, saying that she felt it was the best option to beat the cancer so that she could have more time to spend with her family, especially her grandchildren.  Her family supported her in this decision and they haven’t looked back.  Sugar also credits Dr. Virick for being an excellent and responsive family doctor, who was there for her the entire time, including for her surgery.

Another piece of advice to the youth that Sugar gives is “You might think that people don’t see what you’re doing, but there’s always somebody.  Some little kid, some adult.  Someone will appreciate it.”

Sugar’s values of love, community, education, prayer, humor and family are only some of the reasons the students of ABMHS have chosen Sugar as their Role Model. We hope that we can all live up to these values in the ways that you have.  Congratulations Madeline “Sugar”Poulette, ABMHS’ Role Model for 2021!