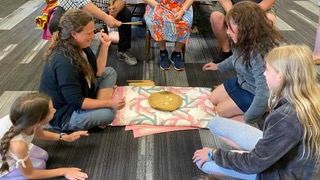 On June 23, 2022 the “Awakening our Talk” language nest had a language retreat at the Digby Pines Resort. This event was facilitated by Beverly Jeddore who had the support of two elders that assisted with language, waltes & a nature walk. We would like to extend a big thank you to  Wilma Simon from Eskasoni and Maynard Marshall from Potlotek for all of their help.

The day began with a ceremony of smudging among the participants and drumming from Beverly Jeddore. Because of fire code regulations we weren't able to light smudge so we used liquid smudge instead. The participants introduced themselves in Mi’kmaw.

We played a game to get to know one another that involved placing a picture card on the back of their shirt and they had to ask questions in Mi’kmaw & English to try to figure out what the word was.  Clues were given as much as possible in Mi’kmaw ex. Color, if it’s an animal, bird etc. Once the participant knew what the card was they had to go to the app and learn how to say it in Mi’kmaw. We then came back together as a group and the participants all named their card in Mi’kmaw to teach one another.

This was followed by a music making session with drums and Ji’kmaqnn. Beverly wanted them to be able to do a rhythm with their instrument. The group learned the significance of the drum and the teaching of the Mi’kmaq and also learned the two songs I’ko & Ko’jua chant. Once they knew the two songs they learned the dances to go along with them. Everyone enjoyed it very much.

After lunch the group took part in a medicine & nature walk with our elders leading Wilma & Maynard. The participants leaned how to use Nemi’k, Nemitu, Nutaq, Nutm : animate & inanimate words for I see and I hear. One of our participants was a biologist and had very interesting information on plants, trees, shrubs & soil.  We all learned something that day.

When we returned, Wilma began her presentation on raw materials needed to make a waltes. Participants were able to hold the bones, wood dice, bowls etc of the game and she taught us the step by step procedure of how a waltes is made. The participants enjoyed playing waltes and we played until two champions were decided.

Our elder Maynard & his daughter Jessie then presented a game developed by his niece Jasmine Johnson. The game cards were in Mi’kmaw & English and the participants enjoyed the game.

The day closed with a prayer and the participants had an opportunity to thank one another for a year of learning the language. We also had prizes and thank you gifts for the elders. We look forward to next year gathering!